It’s been almost 11 months since Stanislaus Sheriff’s Deputy Tony Hinostroza was killed when his patrol car wrapped itself around a  pole at Terminal and Claribel southwest of Riverbank and the CHP still refuses to release any details about the crash.

In the meantime, a roadway feature which may have played a major role in causing the crash as has again fallen into the same state of disrepair it was in when the deputy crashed.

On November 25, 2018, Deputy Hinostroza headed east on Claribel to join in with other deputies who were actively in pursuit of a vehicle attempting to evade them.

As he neared the intersection with Claribel he encountered a raised lane barrier built to contain traffic in the eastbound lane when the intersection was controlled by four-way stop signs. It was painted the same color as the center line. It was after dark and the deputy may not have been able to see that the barrier was there.

When built, the barrier had a series of yellow tubes vertically atop the barrier. Over time, these tubes had been knocked off.

Photo one is of the barrier on Claribel taken a couple of days after the crash.

Photo two is of the barrier taken a few days after photo one and AFTER it was fixed by the Stanislaus County public works folks. Note: Pictures taken after the fix were published by the Bee without saying the photo was of the repaired barrier. 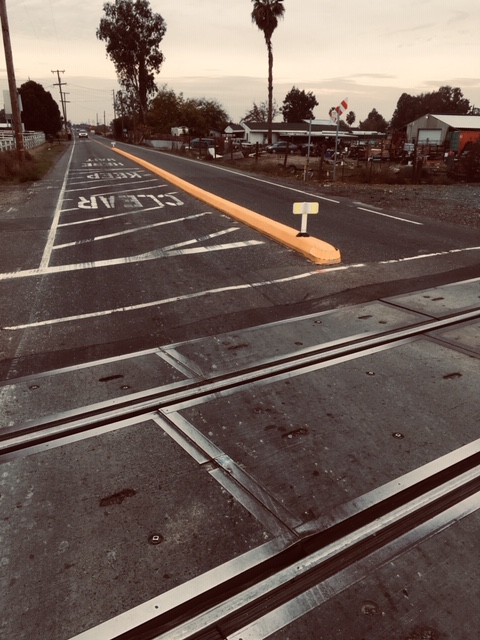 Photo three is of the barrier taken this week. The small reflective  signs which serve to show the existence of the barrier, evident in photo number two, are gone. The sides of the barrier are again blackened, apparently from tires rubbing against them.

Photo number four is of the next roadway crossing of the railroad tracks to the north, within the City of Riverbank. Note the vertical posts AND the configuration of the barrier.

Witnesses said that the patrol car hit the barrier and lost control, sliding sideways before turning then rolling with the impact centered on the left A pillar, right above the deputy. He died instantly.

With the silence from the CHP despite formal repeated requests under the California Public Records Act, beginning last March, we must rely on what I call “observational journalism.” This simply means that the reporter reports on what they saw.

To my eye, the marks put down by the patrol car, including gouges which look like they are from the rim of a deflated tire—rim marks—indicate that the patrol car straddled, at least for a time, that barrier.

The gouges are off and on which could indicate the brakes had been applied as ABS pulses the brakes off and on and could explain why several gouges were made instead of one long gouge.

Whether or not the brakes had been applied and for how long should have been known within days of this crash. The patrol car was equipped with an event data recorder, a “black box”. In addition, the data logged would include throttle position, speed, turning moments and other happenings in the five or so seconds before the impact. That data would be independent of any investigative product of the CHP. In our request for the records we asked specifically for the black box data. That request was refused.

The configuration of the barrier, apart from maintaining the original design, represented a danger. Look back at the barrier built and maintained by Riverbank at the Patterson Road crossing, (photo number four).

If you straddle the barrier on Claribel you have no chance to get back into the proper lane, the barrier is simply too tall and its sides are near vertical. The Patterson Road barrier is lower and more rounded, making recovery possible.

Given the fact that markings or signs atop the barrier apparently cannot be maintained, the question becomes why not remove the barrier? The intersection is now controlled by signals with cross arms synchronized so that the Claribel traffic has a red light when a train passes.

The other question is why is the CHP withholding information about this crash. CHP headquarters, specifically the Office of Risk Management takes the position that the report cannot be released until it is “complete”. The legislative language is clear that a request may be made before the report is complete and refused only when disclosure would interfere with “the successful completion of the investigation…”

The CHP at both divisional and headquarters has not specified what investigation is underway and why disclosure of even some of the details would interfere with its completion.

A study of pursuits covering a three-year period showed a substantial number of chases topped 80 miles per hour and about 10 percent hit 100 mph or higher.

Then, there is the relationship problem which might arise if the CHP was thought to be critical of the configuration of the barrier, and/or the failure to maintain those yellow posts which highlighted the existence of the barrier, especially at night.

While this incident occurred when a deputy was driving, presumably, at a higher than normal speed, this question remains: If use of reflector paddles is justified, why aren’t they maintained?

We are persisting in attempts to get the report and all information about the crash that took the life of a valued public servant.